Welcome to the latest instalment of Breaking In, where I interview authors about their experiences breaking in as writers — how they did it, what it felt like to get there, and how it differed from what they were expecting.

Today I’m thrilled to have the opportunity to interview an acclaimed writer of short fiction, novellas, and novels, who also happens to be having a bit of a banner year – author Kate Heartfield.

As she notes on her website, Kate is an author, editor, journalist and teacher. Her interactive novel The Road to Canterbury was released in April 2018 and her historical fantasy Armed in Her Fashion was published by ChiZine in May. In November, her time-travel novella Alice Payne Arrives will be coming out from Tor.com. I told you she was having a heck of a year!

Kate’s short fiction has been published in a range of prestigious venues. A sequel novella, Alice Payne Rides, will be published by Tor.com in 2019, as will a new novel from ChiZine.

It doesn’t sound like she’s going to be slowing down in 2019, does it?

A disillusioned major, a highwaywoman, and a war raging across time.

It’s 1788 and Alice Payne is the notorious highway robber, the Holy Ghost. Aided by her trusty automaton, Laverna, the Holy Ghost is feared by all who own a heavy purse.

It’s 1889 and Major Prudence Zuniga is once again attempting to change history―to save history―but seventy attempts later she’s still no closer to her goal.

But in 2020 the Farmers and the Guides are locked in battle; time is their battleground, and the world is their prize. Only something new can change the course of the war. Or someone new.

Little did they know, but they’ve all been waiting until Alice Payne arrives.

The first novella in a series about Alice Payne, her scientist girlfriend Jane Hodgson, and Major Prudence Zuniga. Coming Nov. 6, 2018, from Tor.com Publishing.

Kate is also a fellow contributor to the upcoming anthology Nevertheless (Tesseracts Twenty-One), and this the first in my series of Breaking In posts focusing on the creators featured in the anthology. So obviously I’m Not Entirely Unbiased here. 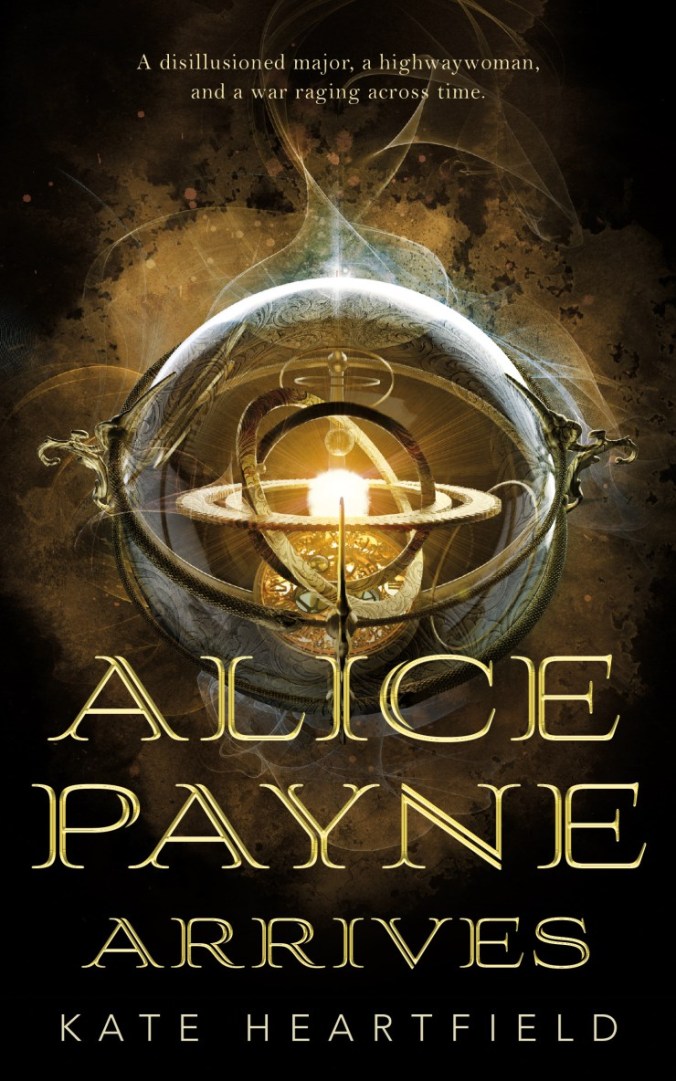 [SGM] Welcome to the blog, Kate! To begin, when did you feel like you’d broken in as a writer?

[KH] Thanks very much for having me! It’s probably in the nature of writers to never feel as though they’ve broken in. But if there was a turning point for me, it was when I signed with my agent, Jennie Goloboy, in 2014. That came about a year after I made my first short-story sale for pro rates, and it was around that time that I qualified for active membership in the Science Fiction and Fantasy Writers of America (SFWA). So 2013/2014 stands out.

What was your path to breaking in? Did you have a strategy? Did it work, or did you end up getting there another way?

My path was a long and tedious one and I don’t recommend it to anyone! I’ve written fiction since I was a child, and I’m 41 now. I finished my first novel manuscript when I was 19, but I didn’t have a clue what I was doing. I printed it out on my dot-matrix and mailed it to a few publishers and then despaired. And then went to grad school. In my mid-20s, I tried again. It wasn’t until my third attempt that I started to write speculative fiction, which had always been my love, but I suspect I had subconsciously absorbed the notion that SFF wasn’t Important Literature. I had also absorbed the notion that trying to learn the craft of writing would destroy my Art. Both these notions were very damaging, but it took me a while to get clear of them.

Once I started writing what I really wanted to write, and once I recognized that I had a lot to learn, lo and behold, I started to get better. I studied creative writing by correspondence with Paul Quarrington through Humber College, and I started writing short fiction to try to understand the mechanics of story-telling better. I joined critique groups, took courses and workshops, read books and generally opened myself up to learn everything I could. From there, it was just a matter of time and effort. A lot of effort.

So I suppose I didn’t set my feet on a useful path until I was in my mid-30s. I’ve wished more than once I’d been clever enough to see that path when I was a teenager. But maybe I had to go through all of that flailing around first. 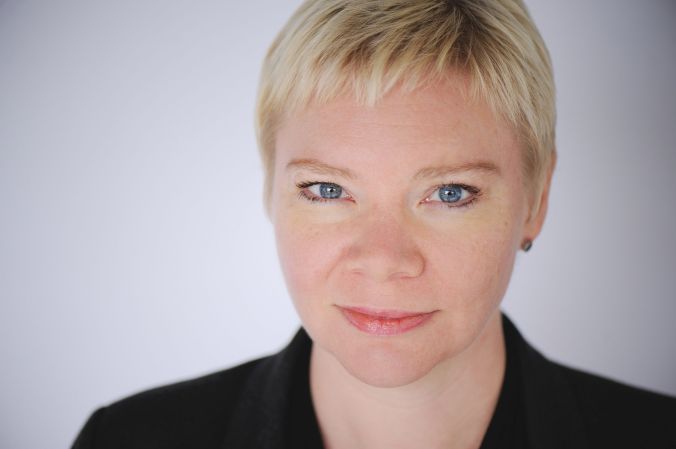 And following up on that, knowing what you do now, what would you do differently?

I definitely would have sought out teachers, peers and mentors, and written short fiction, and written my own kinds of stories instead of the kind I thought I was supposed to write. The internet really allows writers to connect with each other and support each other and it’s been such a help for me, but it didn’t exist in the same way when I was starting out.

Now that you’ve broken in, is it like or unlike what you expected? How?

Being a debut novelist has been wonderful in many ways, especially the connections I’ve made with readers. Holding my first novel in my hands, with that incredible cover by Erik Mohr, is and will always be a thrill.

It has also been … emotionally unsettling, I think is the best way to put it. I had settled into a comfortable despair during the years when I couldn’t get much published. Now, the despair has been replaced with things my brain is eager to worry about: sales and reviews and rankings and all the rest. There is always more promotion you could be doing: a bookstore to visit, a festival submission, whatever the case may be, and it will eat all your time if you let it. I’m doing my best to maintain the mentality that served me well when I was trying to break in, which was to focus on what I could control (my work) and not the external results, which are largely outside my control. But it has required some mental recalibration to get used to the new normal. If you let yourself, there will always be a new thing to worry about, even if that thing is whether or not you’ll stay on the New York Times bestseller list for another week or whether you can juggle all your Guest of Honour invitations (I’m a long way from either of those worries!). So I try to remind myself of that and just keep focusing on the work.

The fact that it took me a while to break in has actually been a mixed blessing in one way: I didn’t have to face what many writers face, which is the contract for the second book after the first has sold. I sold two novels at once, and two novellas hard on the heels of that, so there’s a little less pressure on my current works in progress.

What are you working on now?

I’m writing another interactive novel for Choice of Games. That one should be done and ready for release sometime in 2019. It’s lots of fun. I’m also deep in a rewrite of a novel that hasn’t sold yet. Both those projects are historical fantasy, although in different places and times.

I’ve turned in the manuscript for Alice Payne Rides, the second novella in that series, to my editor at Tor.com Publishing, so pretty soon I’ll be working on copyedits and proofreading for that.

I have some stories coming in anthologies this fall: there’s my story in Tesseracts: Nevertheless, of course, which is about a flying carpet in a dying city. I also have a story in the new anthology from Laksa Media, which is called Shades Within Us and is about migration and borders. And there’s a prequel story to my novel Armed in Her Fashion coming soon in the anthology Trouble the Waters from Rosarium Publishing.

I plan to be at Can*Con in Ottawa and Scintillation in Montreal, both in October.

I also teach journalism and creative writing. This fall, I have an online course called Write Your Novel at the Loft Literary Center that’s designed to include a lot of feedback and mentorships for writers who are working on novels.

How can people keep up with you online?

Thanks to Kate for the interview! I don’t know about the rest of you, but for my part I’m now deeply interested in what will happen when Alice Payne Arrives, and I’m looking forward to finding out.

I’m also excited to read Kate’s story in Nevertheless, which, I will be shamelessly reminding you throughout this series of posts, is now available for pre-order from the publisher!

Coming up next on the blog: A Breaking In interview with Nevertheless contributor Meghan Bell!

One thought on “Breaking In: Interview with Kate Heartfield”

I write comics, prose and free-associative paragraphs that seemed to make some sort of sense at the time. I'm a regular contributor to the Skiffy & Fanty website, where I write about science fiction and fantasy comics and graphic novels. Stephen lives in Toronto, works at the University of Toronto, and has two children. He writes in the bits and pieces of time in between everything else.

Writers on Writing (and Everything Else)